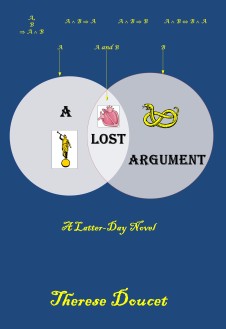 A Lost Argument: A Latter-Day Novel, by Therese Doucet

The summer after her freshman year at all-Mormon Brigham Young University, Marguerite Farnsworth falls in love with philosophy by way of falling in love with an atheist philosophy student. Her search for Truth (with a capital T), God, the meaning of life, and a boyfriend leads her away from religious belief, but along the way she learns there are things even atheists can have faith in.

Therese Doucet grew up in Tucson, Arizona, with a lot of cactuses in her front yard. She studied philosophy at Brigham Young University and earned graduate degrees in cultural history and public policy from the University of Chicago and The George Washington University. She lives and works in Washington, D.C., with her four-year-old daughter.

Purchase directly from us for 20% discount and free shipping

“Blasphemous!” — Hemant Mehta, author of I Sold My Soul on eBay: Viewing Faith Through an Atheist’s Eyes

“I found this book with its portrayal of the stark realities of relationships and the challenges of existence a clear-eyed examination of some of life’s most difficult questions. What I loved most about the book was that it did not shy away from going more deeply into philosophy than about any book I can remember since The Elegance of the Hedgehog. It follows a path that ranges from Kierkegaard to the Marquis de Sade … it’s clear that the author understands the existential difficulties of a faith journey.” — Steven L. Peck, author of The Scholar of Moab

“An inquisitive mind always considers other possibilities. A Lost Argument is a clash of faiths, as Mormon student Marguerite confronts an atheist in a discussion of faith and morality. Through their debate, love begins to bloom and doubts form on both sides. For a Mormon to go further with an atheist would be ungodly. Caught between faith, love, and reason, A Lost Argument is an intriguing delve into faith and what it means to people in the bigger picture.” — Midwest Book Review

“[A Lost Argument] defies exclusive categorization … I think anyone who has progressed from a ‘simple’ view of faith to an increasingly complex and nuanced view of faith through critical study of philosophy, theology, and the scriptures would find something to appreciate in A Lost Argument. … Mormon or not, theist or not, anyone who advocates for the liberal arts and its capacity to develop and sharpen a person’s thinking should read this novel.” — Irresistible (Dis)Grace

“Marguerite transforms and matures (fitfully and awkwardly, at times) through a dialogue not only with the other living characters, but with the conflicting parts of herself, and with writers and philosophers dead and gone whose ideas still live on.”— Wheat and Tares

“[A] realistic and heartfelt portrait of the ups and downs of life and love for young people who don’t fit the perfect Mormon mold.” — Main Street Plaza: A Community for Anyone Interested in Mormonism

“Just think of the sparks that could fly when an atheist and a believer go at it hammer and tongs! [T]he character development was plausible and compelling, the philosophical exchanges were well-written, and the slow creep of doubt on the main character’s mind happened in a very realistic way.” – Adam Lee, Daylight Atheism/BigThink

“This is a great book for discussion. Philosophy and faith are difficult topics to write about and sometimes harder to read. Therese [Doucet] did a wonderful job.” — Goodreads